Scouting for the
Extraordinary

Scouting for the Extraordinary 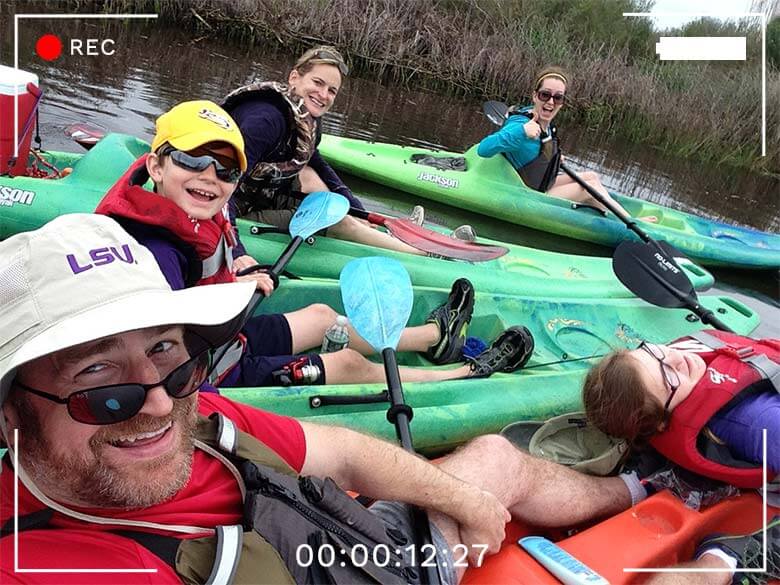 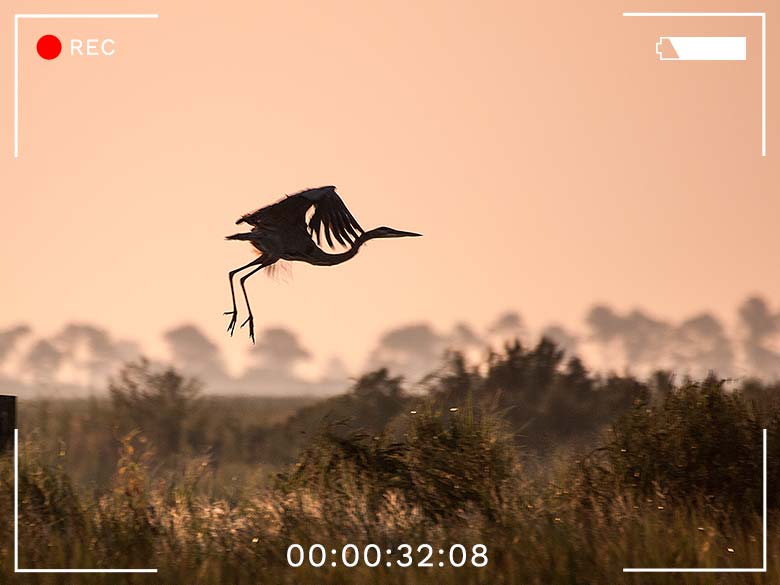 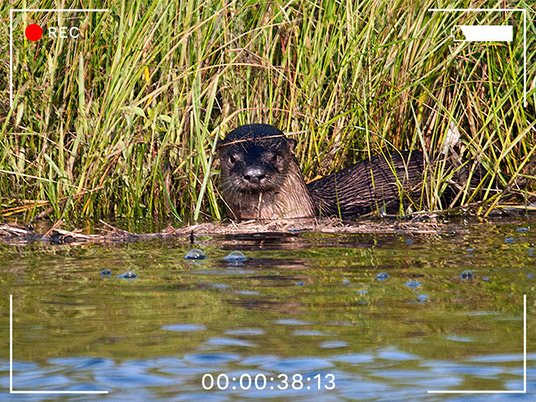 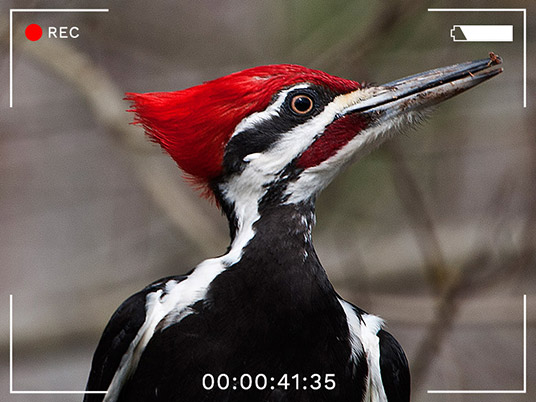 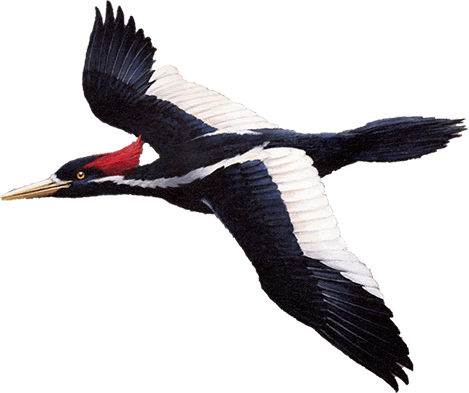 We were kayaking in a Spanish moss-draped bayou near Lacombe, Louisiana, when our youngest dropped her binoculars and pointed to her sister, Irene, 50 yards ahead in her kayak. My wife Melissa and I were in St. Tammany with our three kids—Teelie, Irene and Keenan—and Irene was keeping us centered in her cell phone’s camera.

“We won’t see Ivory Bill if you keep shooting video of us, Irene,” Teelie called to her sister.

“Might want to be quieter so you don’t scare him away,” Keenan reminded her.

Teelie had been joyfully captivated by her search for the rare—if not extinct—ivory billed woodpecker. Rumors have it that the bird might haunt the more remote sections of St. Tammany Parish, a wonderland of woods, bayous, parks, streams and unique little communities on Louisiana’s Northshore, just across Lake Pontchartrain from New Orleans.

Irene graciously consented to put down the camera, and we went back to kayaking, our paddles leaving little whirlpools in the calm waters of Bayou Castine, the outing arranged for us by  Bayou Adventure Outfitters. The air was alive with the murmur and thrum of thousands of marsh creatures as a crystalline blue sky peeked through the overhanging cypress branches high above our heads.

It was easy to forget that this sylvan Eden was so close to the hurried Big Easy.

But the Northshore bustles in its own way. There are the quaint shops and cafés of Covington’s historic district; Madisonville’s hundreds of pirogues, sleek Penobscots, and glossy wooden steam launches on display during its annual Wooden Boat Festival; Abita Springs’ healing waters; and Mandeville’s Pontchartrain lakefront. We were on the go all week long.

On this trip, two of my kids had goals in mind: for Teelie it’s been all about bird watching, and Irene was in search of the perfect shot (she had read that movies like Beautiful Creatures, Beasts of the Southern Wild, and The Green Lantern had scenes filmed nearby). 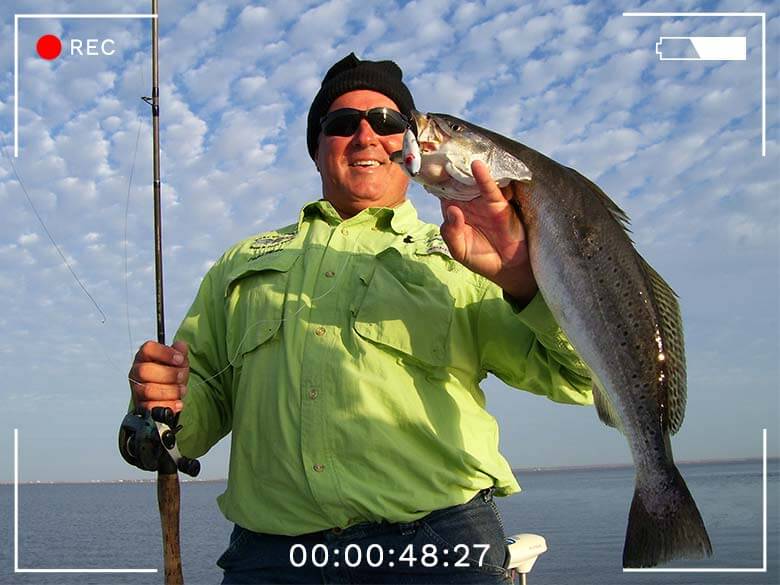 Our son, Keenan—the family’s fisherman—was thrilled with a fishing charter guided by Captain Mike Gallo, of Angling Adventures of Louisiana. Captain Mike has been fishing these waters his whole life. Keenan got a workout pulling sea trout, red drum, tarpon and bass from Lake Pontchartrain’s waters, which produce abundant game fish year round.

“They bite between the tides,” Captain Mike told us as he was baiting a hook for Teelie. “When the tide changes, they school up around the bridge pilings.”

Irene, as usual these days, was getting video.

“Can you put that little wiggly thing on the hook again?” she asked. “I missed it.”

Wiggle or no wiggle, we caught plenty of family fun wherever we went in St. Tammany Parish.

In several separate bike trips along the rails-to-trails Tammany Trace, a 31-mile hike and bike path, we covered large chunks of its course from Covington through Slidell. The ride is easy and flat, with frequent reasons to stop.

At Abita Springs’ Abita Trailhead Museum we learned about the area’s famous resort hotels of a hundred years ago. We had lunch at the Abita Brew Pub right next door. The “Two-Napkin Roast Beef Po-Boy” was outstanding even though the process of dividing it up got messy and we went over our two-napkin quota—no extra charge.

And at Big Branch Marsh National Wildlife Refuge, a Shangri-la of cypress trees, wetlands and marsh grass in Lacombe, Teelie’s binoculars came back out. We locked up the bikes for a while to hike wooden walkways above the bayou waters to a serenade of buzzing insects, birdsong, and the regular plop of frogs leaping into the water. The towering trees and understory were alive with flitting birds, and Irene got some nice footage of a playful river otter. 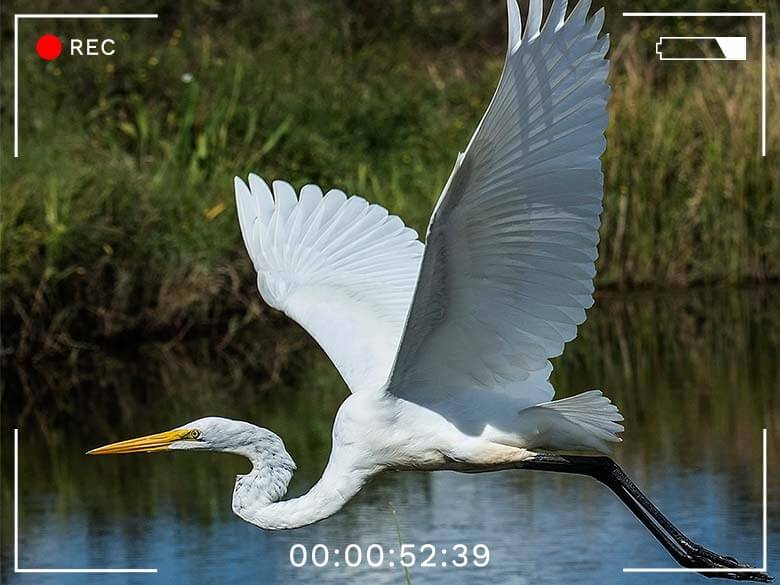 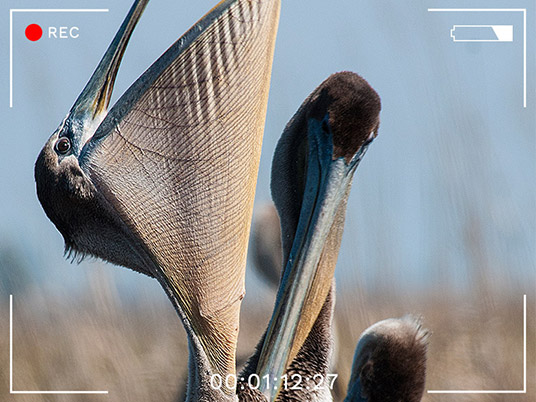 “The great blue heron suddenly leaped into the air and gracefully winged away… teasing past the nearly submerged gator.” 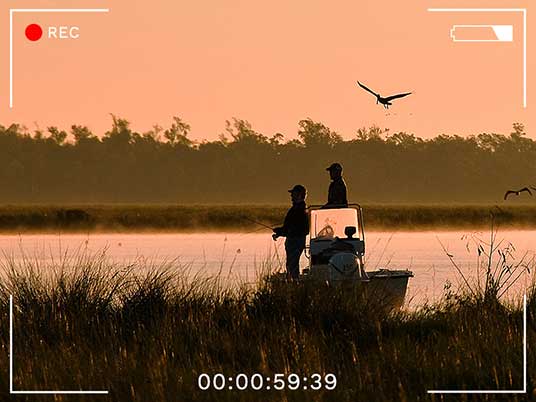 “That might have been Ivory Bill! You never know, it could have been him!”

“That’s a yellow-throated warbler,” Teelie said, pointing. “And that’s an anhinga. Some guy said he saw Ivory Bill around here,” she told us, continuing her hunt for the ivory-billed woodpecker. “Everybody look. He’s really big, with black and white wings and a red head.”

We kept our eyes open, but saw only red-bellied and downy woodpeckers, along with swifts, flycatchers, vireos and jays. Back on our bikes, the doleful call of mourning doves followed us along the Trace like wandering spirits, and Teelie spotted great blue herons and egrets wading in slow motion in the bayou shallows.

“Watch out, Harry Heron,” she murmured, pointing. “Arnie Alligator is sneaking up on you.” The great blue heron suddenly leaped into the air and gracefully winged away, one feather tip just skimming the still water in a long, teasing V past the nearly submerged gator.

At the end of the week, nearing the eastern extent of St. Tammany, we couldn’t pass up a group tour of the Honey Island Swamp—it promised alligators, snakes and plenty of bayou birds. Our guide gave us a rundown on what to look for, including the rumored Honey Island Swamp Monster, possibly some relative of Bigfoot, he hinted.

“American Indians called it Letiche,” he said, “but the Cajuns ’round here call it ‘The Tainted Keitre’ or Loup Carou when they’re scaring their kids into good behavior.”

Everybody laughed except for a lady nervously perched on the edge of the seat next to Teelie.

“The great blue heron suddenly leaped into the air and gracefully winged away… teasing past the nearly submerged gator.”

Gliding through the quiet water—covered over in spots with green duckweed—it felt almost as though we were among the first to encroach on this 250-square mile, trackless bayou. Snakes twined around overhanging tree limbs, raccoons and beavers peered at us from the dark, impenetrable thicket on the bank and Keenan pointed out large, fishy shadows gliding by in the deep shade beneath yard-wide lily pads.

Suddenly, Teelie sat up and pointed as a large black-and-white blur flashed through the underbrush on the right.

The lady next to her flinched. “Letiche?” she cried.

“Ivory Bill?” the lady exclaimed, jumping up and rocking us dangerously. “Who’s that? Should we make a run for it?”

“That might have been Ivory Bill! You never know, it could have been him!”

Things were a little tense until we explained about Teelie’s search for the ivory-billed woodpecker. Even the lady had to laugh then, although she did scootch a little closer to the center of her seat.

When things calmed down Teelie laughed. “That was great!” she said. “That might have been Ivory Bill! You never know, it could have been him! Maybe.” We didn’t see any reason to remind her that her quarry might well be extinct—the joy is in the hunt, after all.

From a few seats away Irene laughed, lowering her cell phone for the first time since we climbed into the boat. She saved the video file of the moments of comical panic and grinned. “Just what I wanted. Perfect.”